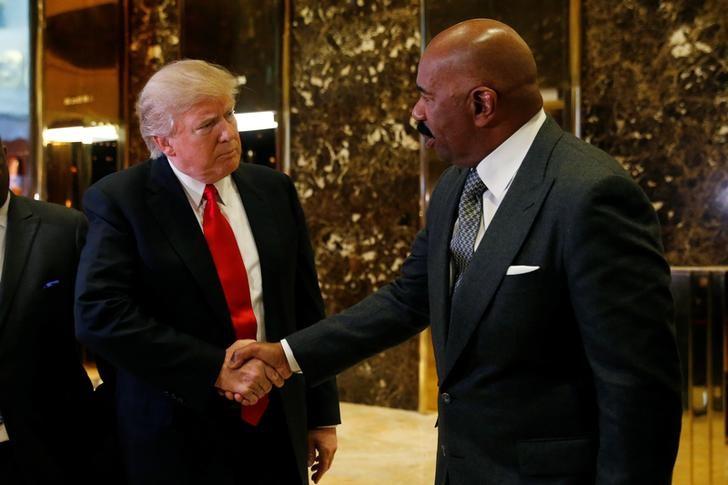 “Nothing in the world is more dangerous than sincere ignorance and conscientious stupidity – MLK Jr.”

With talk of the President-elect meeting with Kanye, Jim Brown, Ray Lewis and Steve Harvey recently regarding the issues plaguing African American communities, I kept wondering why it bothered me. Questions kept coming up in my circles like, “Why shouldn’t they meet with him?”

People have varied interests besides their chosen profession. I love to draw, though I don’t think my work has achieved the level of mastery enough to abandon my day job.

Which is probably why people are upset at the recent photo-ops.  Of course the men above would probably work to help alleviate the problems of high poverty, high unemployment, underemployment, the wage gap, education barriers, et. al. I’m sure that concerns them very much.  But what would meeting with Trump actually do? And where are all of the actual scholars who research and work in this field to give him data on those problems and concerns?

My question would be why not meet with people who are actually working on this?  Because there are many think tanks who actually attempt to address poverty.  Why not look at what’s working and what’s not working to actually address the concerns in a real way?

On todays program, Diane Whitmore Schanzenbach, Director of the Hamilton Project and Senior Fellow at the Brookings Institution will join me. She has been studying issues related to reducing child poverty and education policy.  She was a panelist at the Center on Budget Policy Priorities regarding Reducing Poverty with Chairman of the council of Economic Advisors Jason Furman yesterday.  She’ll talk about her concerns as well as steps she has examined to reduce poverty in America.

Also on the program, Cornell Belcher, President Obama’s pollster for both campaigns will reflect on these last days in the White House for the Obamas as well as talk about his new book, A Black Man in the White House. It takes a critical look at how our first African American president triggered a racial-aversion crisis in this country.

It’s a double header today!  So I hope you tune in to WERA-FM 96.7 in Arlington, VA from 4-5p ET every Wednesday and check us out online at Facebook.com/EnlightenMeonWERA or on Twitter @EnlightenMeWERA @andreacambron.