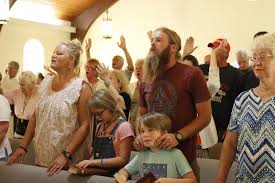 Enlighten Me took a much needed winter break but we’re back! It looks like were just in time to people watch Oprah’s run for president. Wait, what? How did we get here?

I love Auntie Queen Oprah, really I do, but I don’t know if idolizing personalities is the way to go. Even though I believe Oprah would have us all living our best life.

I also don’t believe in living in a theocratic state whether that be on the more progressive or conservative side.  There are pluses and minuses on both sides of the aisle. Which is why i’m having Rewire’s Jenn Stanley and investigative reporter Sofia Resnick on the program to talk about their latest project, Choice/Less — Marching Toward Gilead: The Rise of American Theocracy, a two part podcast on Operation Save America (OSA), an organization “committed to a United States in which abortion, homosexuality, Islam, and anything else its leadership considers “ungodly” is a criminal offense.”  They reveal the alarming ways OSA’s far-right ideology is worming its way into state and federal government.

Tune in to Enlighten Me from 4-5p ET on WERA-FM, 96.7 in Arlington, Va. or check us out online at Faceook.com/EnlightenMeonWERA or on Twitter @EnlightenMeWERA@andreacambron.